Roberto V. Ongpin (RVO) made the list as the world’s 1795th richest individual with $1.1 billion wealth, 13th largest in the Philippines.

Remarkably, the fabled Zobel Ayala family behind the Makati crown jewel didn’t make it among the world’s gilded elite.   The family’s retired patriarch, Jaime Zobel de Ayala, 83,  was last year listed as the seventh richest individual from the Philippines with an awesome $4.1 billion worth of wealth per Forbes reckoning.  This year, Forbes apparently realized it over-credited wealth to Zobel-Ayala.

Also absent from Forbes’ royalty of the wealthy were the Aboitiz family (No. 3 among Filipino billionaires last year with $5 billion wealth), and Puregold retailing taipan Lucio Co (No. 11 last year with $2 billion).

Of the 14 Filipinos in the 2017 list, Bobby Ongpin is No. 13, with wealth of $1.1 billion behind tycoon Eduardo Cojuangco Jr. of San Miguel Corp. whose wealth Forbes estimated at $1.2 billion (1678th largest worldwide and 12th in the Philippines). RVO is ahead of emerging retailing and property taipan Edgar Sia whose wealth is estimated by Forbes at $1 billion (1940th worldwide and 14th in the Philippines).

On Aug. 3, 2016, Duterte targeted Ongpin as an example of a oligarch embedded in government and whom he wanted to “destroy”.

He described the oligarchs as accumulating money at the speed of a taxi meter, while ensconced in their jets and mansions.

Apparently, Duterte didn’t intend to single out Ongpin. He was simply mad with gambling, which is the curse of the poor he loves.  He wanted to get rid of gambling, online or not.

Stung, Ongpin immediately took steps to defend his business and his reputation.  He clarified he was not into any kind of gambling. His  PhilWeb was simply the owner of a software being used by the state-owned gambling monopoly PAGCOR which was licensing online gambling outlets.

Ongpin had 286 of those e-Game outlets under the listed PhilWeb. “We are not an online gaming company. We are just the software providers of e-Games, which is actually owned by PAGCOR,” he said.  He sold his 53.76% of PhilWeb for only P2 billion, a loss of P18 billion ($379 million then).

Fast forward to summer 2017.   Ongpin does not  seem to show the wounds of his apparent financial setbacks in 2016.

His holding company, Alphaland Corp. is on a roll.  It is undertaking even larger and more ambitious projects with Ongpin, 80, providing the vision and management execution.

In February, Alphaland secured a P5.5-billion loan from BDO Unibank.   “This is  the most significant development for Alphaland,” gushed Ongpin. “Aside from the obvious improvement in the financial position of Alphaland, this is a significant vote of confidence from the country’s largest bank. It tells an important story.”

The loan is for seven years with a one-year grace and  has lower than average interest.  Alphaland will repay existing bank debts of P4 billion. The balance of P1.5 billion will help fund new major projects such as the Balesin Gateway (Patnanungan Island) and the Alphaland Baguio Mountain Lodges.

Notably, the P5.5 billion BDO financing heralds what one analyst says is a major strategic direction — “Bobby Ongpin is back in business.”  Three years ago, Alphaland “divorced” from its partner, the British fund Ashmore. Last year, Ongpin got unwanted attention from President Duterte that necessitated his divestment from a major asset, the online gambling software provider PhilWeb, a listed company.  The tycoon was bruised financially of course.  But life must go on.  There are other battles to win.  The man, after all, has the genes of a legendary entrepreneur and revolutionary hero after whom a famous street in Manila is named. Also, RVO helped build the largest accounting and professional service firm in Asia—in his younger days.

Having regained his gravitas, Ongpin is developing a resort island destination for domestic and foreign tourists — a chunk of 750 hectares from the 14,000-hectare Patnanungan Island 20 minutes by helicopter from his present 500-hectare exclusive Balesin Island Resort which has 7.3 kms of white sand beaches, twice the length of famed Boracay.

Patnanungan is to be developed as an upscale beach resort complete with an 18-hole golf course and a five-star hotel boasting 300 to 400 rooms.  Development will cost P5 billion, including the cost of a runway good for jets.

Balesin cost P7 billion to develop in three years, with 300 rooms and 14 suites  in seven themed beach villages, patterned after some of the most luxurious beachside resorts around the world.

About 9 kms from Baguio, the summer capital, Ongpin is building 300 log cabin houses on 79 hectares of pristine chunk of mountain property.  Last week, he flew by private jet to Europe to procure logs for the lodges. Not only are the logs there cheaper, they are also of better quality because of the region’s severe winters.  Alphaland President Anna Ongpin says development will cost P5 billion in over three years – 50 homes in the first year, 100 in the second, and 150 in the third.

For the first 50 homes, 96 have made reservations, stunning for units that cost as high as P50 million each, placing potential revenue at P15 billion if all 300 houses are sold within three years.

Ongpin has a solid track record in building mountain resorts.  He pioneered the concept in Tagaytay, with the hugely popular and expensive multi-level Highlands.

In September 2016, Balesin Island Club acquired one of the world’s best super yachts – “M/Y Obsessions.” This 38-meter aluminum hull yacht was built by the Heesen shipyard in Holland, and is the pride of their fleet. It can do up to 32 knots and thus outrun any weather. “Our Balesin members and their guests have been enjoying chartering this yacht around Balesin for sunset cruises and to the nearby islands,” exults Ongpin in a letter to Alphaland stockholders.

Alphaland has also completed two other crown jewels—the Makati Place and the Aegle Wellness Center of which there are two—a compact one at City Club Alphaland Makati and a much bigger one at Balesin.

Ongpin has just secured a P5.5 billion loan from BDO to fund his projects.  The tenor is seven years at below average price.

Add $1.38 billion and $338 million and one can easily figure out that Ongpin is readily worth $1.7 billion.  Which may explain why RVO is ranked 1795th  among the world’s 2,043 billionaires and the 13th richest person in the Philippines.

Duterte and the oligarchs

Last year, in the fog of war against drug lords and bad oligarchs launched with savage fury last by President Duterte, one of the biggest victims had been Ongpin.

The irony is that the Harvard-educated management whiz kid is not at all an oligarch, not an oligarch imbedded in government, and certainly not a businessman who did or has done damage to the country and the Filipino people.  An honors in business graduate of Ateneo de Manila University, Ongpin made whatever money he has and built whatever businesses he runs today the old-fashioned way—through hard and honest work and sheer talent.

Balzac’s dictum, “Behind every great wealth there is a great crime” can hardly be applied to him.  Bobby is a genuine Filipino and a true patriot.

Bobby descended from Roman T. Ongpin (1847-1912) of the street that bears the latter’s name and statue in Binondo.  Roman was  a nationalist businessman and revolutionary who financed the Katipunan revolt against Spain and opposed American rule in the Philippines.

Bobby Ongpin and his late brother Jaime (Cory Aquino’s finance secretary) were born not exactly rich.  They succeeded through dint of scholarship (they were educated by the Jesuits before going to Harvard), and hard work.

Bobby was the youngest and longest-serving chair and CEO of SGV which he built  into being the largest professional services organization west of the Mississippi.

He served for seven years (1979-1986) as trade and industry minister of Ferdinand Marcos during which time he helped stabilize the peso against the dollar, manage foreign reserves (which went down from $770 million to $14 million overnight in the 1983 crisis), control galloping inflation (running at 44% per year), and resurrect the economy during the worst economic crisis in the country after the 1983 Ninoy Aquino assassination.

After People Power 1986 (which he actually helped trigger, but that is another story), Ongpin moved to Hong Kong and funneled badly needed foreign investments into the Philippines.  Venerable and true patriots are words that should be associated with the Ongpin name, not “bad oligarch.”

Bobby Ongpin is not the typical ultra rich local oligarch, Chinese, Spanish or half breed, who accumulated wealth through drugs, through cronyism, through smuggling, through denying the average Filipino worker his due wage, through monopolistic or oligopolistic business practices whereby a premium public good is priced prohibitively,  or a valued service is so badly rendered and retailed at a very high price at the expense of the hapless Filipino consumer and public.

He also had directorships in large corporations like San Miguel Corp. and Petron Corp.

BizNewsAsia’s “Man of the Year 2017” is indisputably President Rodrigo Roa Duterte. A lawyer and former prosecutor, the mayor of Mindanao’s Davao City for 23 years romped home the coveted title with very little competition. […]

President Rodrigo Roa Duterte means business.  That is clearly evident from his third State of the Nation Address (SONA) Monday, July 23, before Congress in suburban Quezon City.    The SONA was 4,870 words long, lasted […] 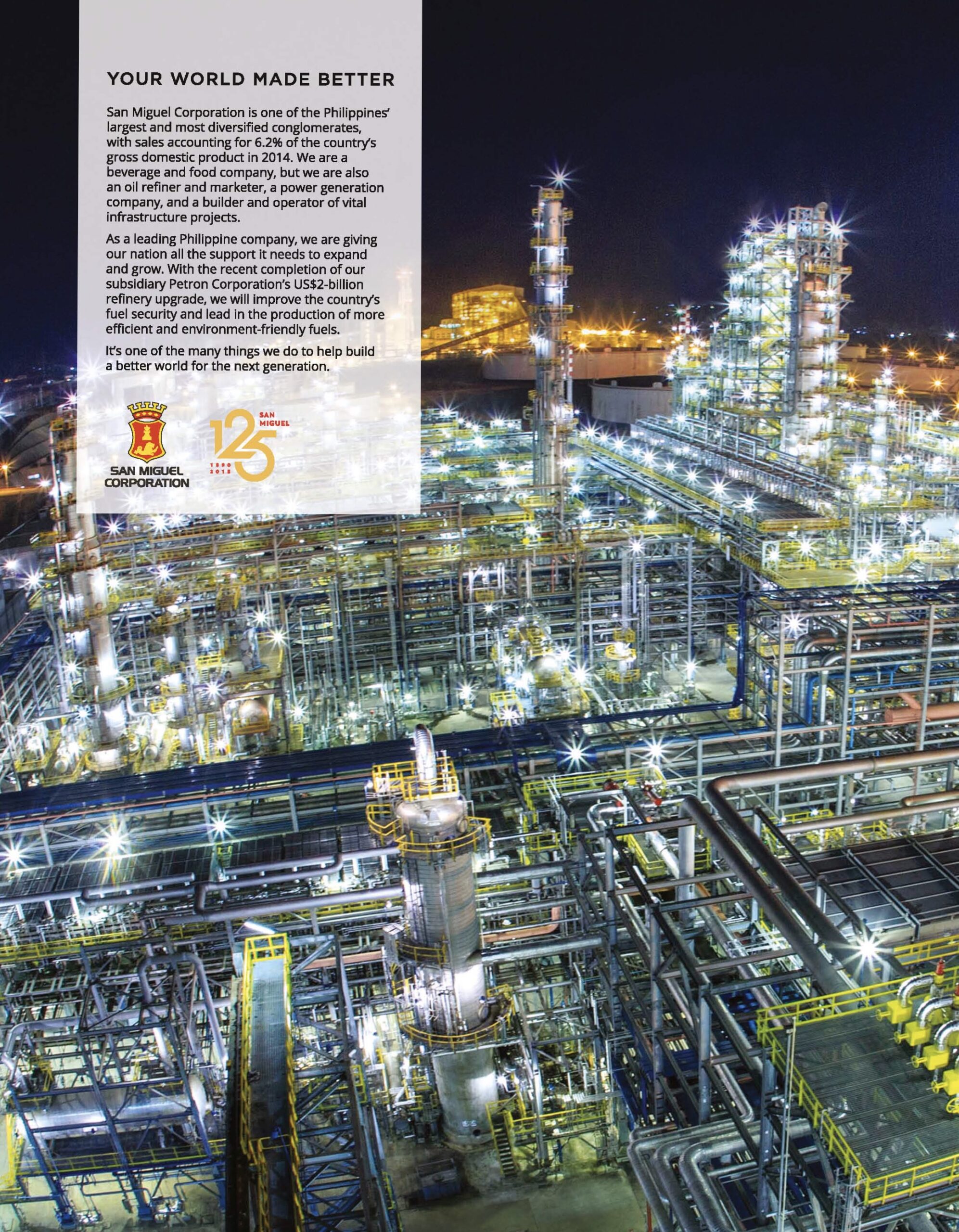